Ambassador and Permanent representative of France on the Council of the International Civil Aviation Organization (ICAO), in Montreal since August 2020. 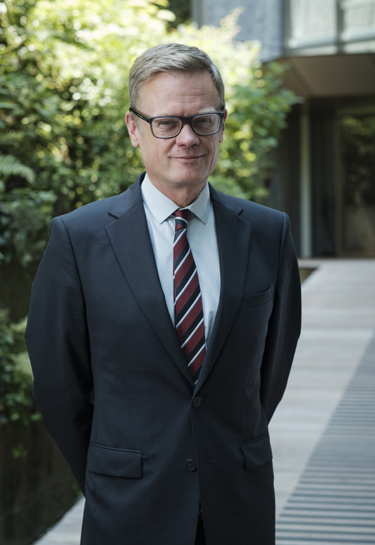 • Joined the French Foreign Affairs Ministry, 24 March 1993 ; • At headquarters (European Directorate), in charge of Russia and the Caucasus, 1993-1995 ; • Deputy head of mission, Cultural Attaché, scientific and cooperation in Manama, 1995-1997 ; • At headquarters (European Cooperation) in charge of EU Development policy, 1997-2001 ; • Advisor to the Minister for European Affairs, 2001-2002 ; • First Secretary at the French Permanent Representation to the European Union in Brussels, (Mertens and Antici Counselor), 2002-2006 ; • Second Counselor at the French Permanent Mission to the United Nations in New York, Head of the Economic, environment and social department, 2006-2007 ; • Deputy Secretary-General of European Affairs at the Prime Minister’s Office, 2008-2009 ; • At headquarters, Chief of Staff to the Secretary-General of the Ministry of Foreign Affairs, 2009-2012 ; • Diplomatic advisor at the Prime Minister’s Office, 2012-2014 ; • Secretary General of the Conference of Ambassadors, April-September 2014 ; • Ambassador Extraordinary and Plenipotentiary to the Netherlands, 2014 - 2016 ; • Chief of Staff of HE Jean-Marc Ayrault, Minister of Foreign Affairs and International Development, 2016 - 2017 ; • Ambassador Extraordinary and Plenipotentiary of France to Japan, 2017-2020. • Since August 4th 2020, Ambassador, Permanent Representative of France to the ICAO Council.

Advisor and alternate to the Permanent representative of France on the Council of ICAO, since July 2018.

M. RISSE is tasked with all Council and General Secretariat related matters that are not part of the ANC activities.

He graduated from the National School of Administration (Ecole Nationale d’Administration, 2016) and from the University of Nancy II where he obtained two master degrees in business law and European law. He previously worked for the French Ministry of Armed Forces as a European law legal advisor and for the Directorate-General Justice of the European Commission in Brussels. He was also head of the office of competitiveness and innovation at the French Ministry for Ecology and Transport. In this context, he was a representative for the “Transports” Program Committee of the European H2020 Program.

Before being appointed in Montreal, he was working for the Directorate General for Civil Aviation (DGAC, Direction générale de l’Aviation civile) within the cabinet of the Director-General. He then became head of the International & European Law Office and therefore participated in the negotiation of several international and European legislation at the ICAO, Eurocontrol, ECAC, European Union and EASA.